Julian Saporiti has always been a masterful lyricist. His perceptive observations crafted with well-chosen words manage to convey mood and message without excess. Along with his writers’ feel for language come lovely, memorable melodies that embrace every line. Back in the early 2000s Saportiti brought his songs to life with his band the Young Republic, releasing a couple of impressive albums on End of the Road records before the band broke up in 2010.  You can hear their work here: And here:

(Full disclosure and proud parent moment:  my son was in this band!)

Saporiti disappeared from the music scene for several years while he pursued studies in American history, earning a master’s degree in Wyoming and landing at Brown University to pursue a PhD. Now he’s back in the spotlight with a new collaboration with fellow Brown PhD candidate Erin Aoyama as the duo No No Boy and a new album called 1942. The time behind the scenes has been productive for Saporiti, and the new album glows with quiet songs of loss and longing. Inspired by his doctoral research, the songs evoke eras past from the Asian American perspective, illuminating their marginalized experiences during WWII and the Vietnam War. 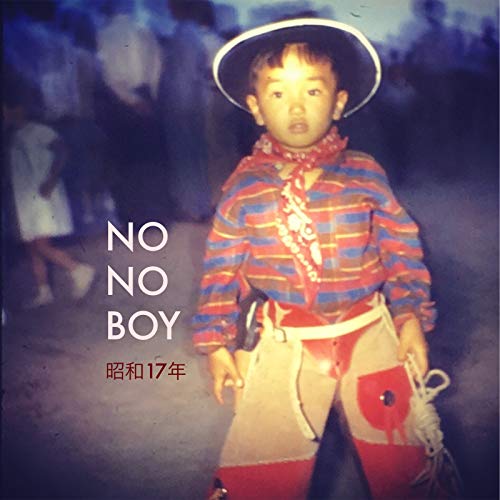 A major focus of 1942 is on the internment of Japanese Americans by their own government during WWII. Oddly enough, as Saporiti explores the plight of these internees, the stories blossom as love songs. In “Heart Mountain” a man looks forward to an idyllic future with his sweetheart, “with so much love that it spills and runs down in rivers past the house that we build.” But meanwhile, “a daydream must do” along with stealing kisses in the laundry room and admiring her “perfect crooked tooth.”

In “Two Candles in the Dark,” a boy is infatuated with a girl who doesn’t know how to dance (“my eyes are stuck on her/her eyes don’t leave her feet).  And there’s the “would-be Casanova walking three girls home” in “Instructions to All Persons.”

And yet we feel the undercurrent of despair. In “Heart Mountain” (the real name of an internment camp in Wyoming, the camp, in fact, where Aoyama’s grandmother was incarcerated) the lovers lament that “over and over our hearts are rapped by the rules,” And again, when the two lovers are dancing, the woman who can’t dance says she’s “gotta get out of this place,” not the idle lament of a restless teenager, but the desperate yearning of a woman incarcerated. Casanova has received a letter that begins “Instructions to all person’s of Japanese ancestry,” and in the context of the album 1942, we know what that means: he is being forced to leave his home to be interned in a camp far away, simply because of his Japanese heritage.

In “Ogie/Naoko” two young Japanese Americans living in Hawaii can’t see each other because of the restrictions of martial law (the backstory explained in the liner notes). “Where may our loyalties end?” Ogie asks Naoko, the woman he loves. “To each other, of course, to the end,” she answers. Personal bonds transcend political ones for these characters, and we love them all the more for that.

Yet Saporiti doesn’t back away from the political realities in these love stories. The unfair plight of these characters becomes even more poignant as we see them struggle with their bondage while at the same time experiencing the wonders of romantic love. “And he felt good, for a moment or so,” Saporiti tells us in the refrain of “Instructions to all Persons.” Of course he did. I would too, we think to ourselves, and in our empathy we find more disgust for the system that put these innocent people in such unfair imprisonment.

Other songs are more autobiographical, as Saporiti examines his own Asian American experience. In “Boat People,” a riveting tale of a doctor’s perilous escape from Vietnam in an flimsy fishing boat, he reflects that “my mother came here too, forty years ago.” And in “Dragon Park” he seems to be recalling his own youth as a Vietnamese-American in Nashville when he says “I know that Southern stare/not just at home but everywhere.”

Musically 1942 stays low key. Acoustic guitar is punctuated by well-placed strings. Piano, ukulele, and pedal steel are all used sparingly to good effect. Saporiti’s voice is consistently warm and expressive while Ayoama’s harmonies add clarity to the lyrics. I confess, I miss the drums and would like to hear a full rock band rendition of some of these songs, but clearly that’s not what Saporiti is going for on 1942. The quiet approach allows for romance and whimsy while also lending gravity to the underlying loneliness of characters stung by the irrationality of prejudice and racism.

1942 is an album about war and incarceration. And yet, it’s really quite lovely. Saporiti’s musical story of the Asian-American experience is ultimately one we find ourselves humming along to as we reflect on our own stories.

"Do you remember lying in bed with the covers pulled up over your head, radio playing so no one could see?" (The Ramones) Yes, I do. And I remember the Beatles on the Ed Sullivan Show. And I believed in the magic of rock ‘n roll. Funny thing is, I still do. Somehow I never grew out of my fangirl phase. In recent years I’ve enjoyed writing local history books. But after three successive publications, I took a break. And then I realized that without deadlines or contracts, what I really want to write about is music.
View all posts by Luann Yetter →
This entry was posted in Music and tagged Julian Saporiti, no no boy project, No-No Boy. Bookmark the permalink.