Editor’s Note: Last summer when I taught my class on writing local and family history I got to read some wonderful work. One of the projects I know will be of interest to my readers is this one by Mt. Blue High School senior Sylivie Haslam. Sylvie’s family history in Weld is interwoven with the Cushman family, prominent in the 1800s and with artist Seavern Hilton who made his mark in the mid twentieth century. Join us as Sylvie explores Weld history, family history and the folk art that traveled far beyond the village of Weld.

Seaverns Hilton, the artist who rented the barn, was born in Rhode Island right before the turn of the century, in 1898. He applied his artistic skills to advertising and illustration in  New York City and began to divide his time between there and Weld when  he was still in his thirties. There is a photograph of Seaverns Hilton in the Weld Historical Society’s book, I Remember When – A Weld Family Album: A Celebration in pictures of the town of Weld, Maine. The photo shows Hilton smiling with his hands on his hips in front of a building. He looks happy to be working; from this photograph, it is easy to imagine that Hilton loved his craft. He is balding, though what hair he does have in the image seems to be white. He is wearing what looks like an apron over his pants and a bow tie around his neck. I imagine Hilton was dressed for woodworking and the picture was taken in front of one of his woodshops. The building looks different from the photos I have seen of the Cushman barn, so I doubt he is there. I believe the photograph may have been taken at the Farmer’s Wife, a restaurant on Center Hill, based on photos I have seen.

Seaverns Hilton began his woodworking business on Center Hill, close to his home. This shop stood close to the Farmer’s Wife. My mother remembers the restaurant was still up and running in the summers when she was a kid. She recalls visiting it with her family during the summer months; “It was always a big treat,”she said, “ to go up the hill and get an ice cream cone from the Farmer’s Wife.” She also remembers clearly that some of Hilton’s artwork was on display at the restaurant. A pamphlet titled Weld Sesquicentennial 1816~1966: History and Program describes Seaverns Hilton’s artwork at the Farmer’s Wife as “fanciful decorations.” My mother says these included many sculptures of animals that enchanted her as a child.

Hilton originally opened his woodworking shop with a man named George Lee. This shop was located in the back of the Farmer’s Wife, which was built and owned by a couple named Mr and Mrs Lester Lee. The Lees eventually sold the business and it passed through the hands of three more owners before it closed down in the late seventies. A picture of the Farmer’s Wife was featured in Life magazine in 1937. The Life article says that “all other roadside stands seemed unimaginative” after the Farmer’s Wife. It also mentions that Mrs. Lee had “the excellent judgement to talk over plans with S. W. Hilton” before building the shop.  The Farmer’s Wife operated as a restaurant in the summer months and “during the fall hunting season it operated as a hunting lodge to accommodate sportsmen.”

Hilton designed the architecture of two Maine shops, the Farmer’s Wife and the Elegant Pack Rat, a shop in South Paris, Maine. The building featured several rats around the top of it, and a big rat in a top hat above each of the large signs that boast the name. I can imagine that these trademark pack rats made the shop a memorable destination.

I came across a pamphlet titled Weld Sesquicentennial 1816~1966: History and Program. I assume it was published in 1966 for Weld’s hundred and fifty year celebration. The pamphlet features a schedule for the festivities, the page decorated by little sketches of a man in a top hat doing each of the activities. These included a horse show, fireworks, street dancing and a parade among others. My grandmother, Lee Graham, brought this to my attention, saying that she thinks the event sketches were done by Hilton. Looking at them, it is clear that they are in a similar style to Hilton’s figurines. 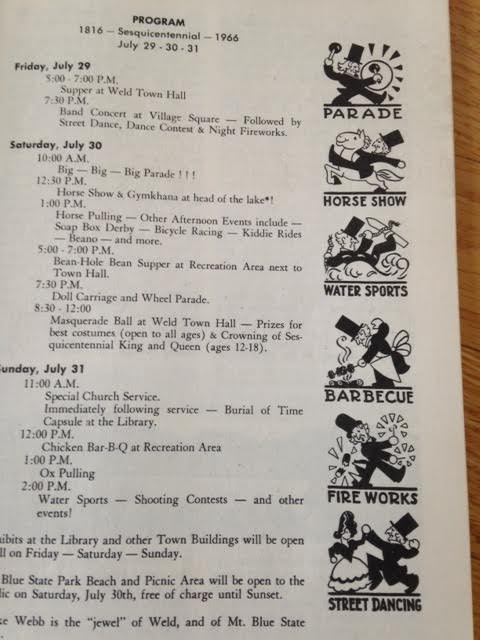 During my childhood, my mother had a piece of Hilton’s artwork. She kept it on a bookshelf in our living room. It was one of his little wooden sculptures, in the shape of a little girl in a pink dress, her hair so blond it was almost white. She was playing a grand piano set upon a wooden platform. The whole sculpture was only the size of a typical book. it was made at the Woodworkers of Weld shop.

Another one of Hilton’s wooden figurines was a little man on skis wearing a dark green or blue uniform. I can’t remember exactly, but I’m pretty sure he was wearing a hat that made me think of a band uniform. The man had the same type of round head as the little piano girl. He was a Christmas tree ornament, or at least that is how we used him. A special spot was reserved for him at the top of our tree, where he would hang every year. His skis made it look like he was skiing down the tree itself. I remember thinking he was really cool, wishing I had little dolls like him. He must have been fifty years old at least, but the paint was still vibrant and his body wasn’t chipped at all. Based on my experience, I would say Hilton’s figurines are definitely high quality.

One of Seaverns Hilton’s pieces is fairly well known in the area. This one is a drawing, depicting a map of eight hiking trails in and around Weld. It’s titled “Mountain Climbing From Weld” and each trail is labeled. The drawing shows the familiar landscape of mountains in Weld, complete with fluffy clouds above them. The president of the historical society, Sean Minear, said that the panel is “one of the most familiar images of this town.”  The image was once painted as a mural on the side of Weld’s General Store and served as a landmark in the town for a long time.

Minear described Hilton as “a published author, a noted artist, a business owner, a talented musician and a character of the highest order.” He wrote three books, Three for the Money, The Gods of the Greeks, and How to Retire Gracefully (Without Either Bloodshed or Boredom). I hadn’t heard of any of these books previous to reading a newspaper article titled “Weld Artist Publishes Third Book”. I also had trouble finding any trace of the books online, although I did find a copyright entry for The Gods of the Greeks made by Hilton in 1974. The article was published along with an image of Hilton and a dog, labelled his “friend” in the caption.

The same newspaper article that shared the information about Hilton’s books says that he is “most famous for his ‘pictorial panels’” which were placed along the Arnold Trail as well as at the Little Red Schoolhouse in Farmington and historic Maine forts. These panels featured informational text and illustration. They were well known to my mother. She can remember that the Arnold Trail panels were brought to her elementary school and put on display for a day or two. Her teacher taught the small group of kids all about Benedict Arnold during the school day and later that night they had a public open house. The panels were huge, the size of a sign that would be hung at a trail. At the time, she had no idea that these panels were made by Seaverns Hilton.

Next week we’ll take a peak at the shop where the Woodwork’s of Weld made their creations.

Sylvie Haslam is a senior at Mt Blue High School who has lived in the Farmington area her entire life. She loves reading, writing and chickens, not necessarily in that order.

"Do you remember lying in bed with the covers pulled up over your head, radio playing so no one could see?" (The Ramones) Yes, I do. And I remember the Beatles on the Ed Sullivan Show. And I believed in the magic of rock ‘n roll. Funny thing is, I still do. Somehow I never grew out of my fangirl phase. In recent years I’ve enjoyed writing local history books. But after three successive publications, I took a break. And then I realized that without deadlines or contracts, what I really want to write about is music.
View all posts by Luann Yetter →
This entry was posted in Franklin County, History, Travel and tagged Seaverns Hilton, Weld Maine, Woodworkers of Weld. Bookmark the permalink.